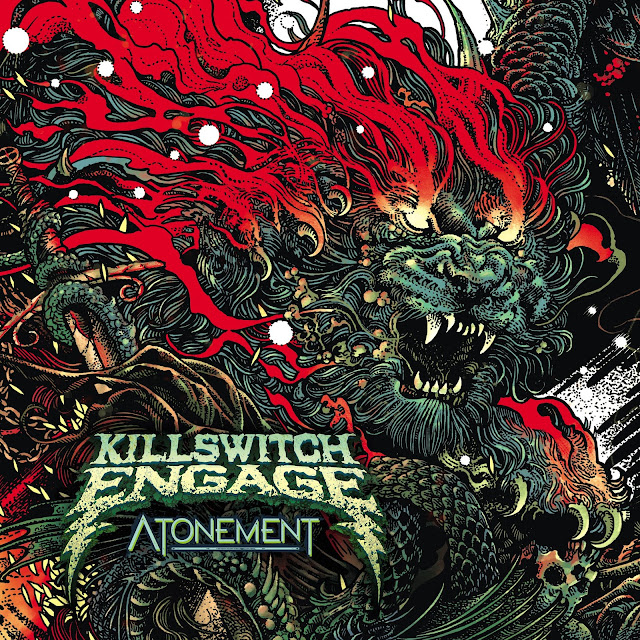 The argument could be made that metalcore kings Killswitch Engage have yet to release a bad album (depending on who you are of course, although 2009’s self-titled album was slightly suspect). And if you are of that mind, then Massachusetts metallers give no reason for pause of their eighth studio album Atonement, a true monster of a record from start to finish with endless shreds, vicious barks and some of the best heavy grooves in the game.

Worlds collide on the ferocious “The Signal Fire” as former Killswitch (now current Light the Torch) frontman Howard Jones and current throat Jesse Leach squad up to breathe fire, showcasing what each do better than most – deftly transitioning from blistering back-and-forth barbs to nailing one high harmony after another. The tag team action doesn’t stop there thankfully, as KsE then welcome vaunted Testament mainman Chuck Billy on the equally powerful “The Crownless King,” who pushes Leach to the top of his game with his trademark gravel-throated growls, a track guitarist Adam D calls ‘fucking awesome.’ And he ain’t lying.

KsE extend a willing hand into the darkness on the standout “I Am Broken Too” with hopeful lines like ‘I see myself in you / I know you can make it through / If you needed proof, I'll reopen my wounds / In all the right places for you / So now you see the truth that you are broken too / I'll reopen my wounds for you.’ This track is a reminder that you are never alone and that if you need help, just ask for it. Prepare for goosebumps.

Atonement’s entire ethos is summed up on the beastly “Know Your Enemy,” as Leach defiantly proclaims ‘bow down to no one, resist the system and fight back.’ “Take Control” is a throwback to the power metal-leaning cuts of The End Of Heartache with big riffs, bigger hooks and slow burning crescendos, “Ravenous” lives up to its name, going all “Rose of Sharyn” types of heavy on Atonement, with a soaring hook to boot, a sonic blueprint that bleeds onto the closing “Bite The Hands That Feeds,” which finds Leach venomously spewing the lines, ‘we won’t go quietly…what would you kill for…what would you die for,’ as Atonement fades to black.

I’ve been waiting for the better part of 2019 for an album to blow me away – thank you Killswitch Engage for writing it.