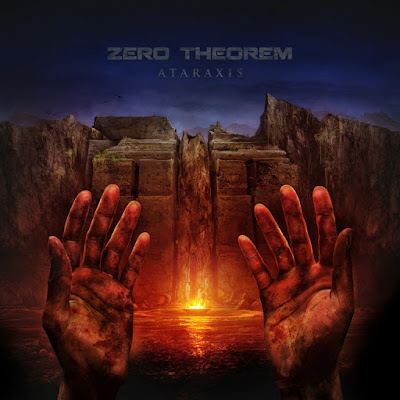 Nowadays in music everyone seems to be constantly looking for the next big thing – the new Disturbed, the next Five Finger Death Punch, the next FLAW – and often times the band tabbed with that label fails to live up to expectations. Things are different with Zero Theorem. Now, I’m not saying that these guys are the ‘next anything,’ but it’s clear from their debut EP Ataraxis that they have the goods to be ‘next something,’ and a major player in the future of modern metal.

Led by a powerful vocal battery from frontman Caesar, whose passion and breadth of ability is audibly woven into each and every bar, Ataraxis is a clinic in fresh faced modern metal. Producer Kane Churko’s (Papa Roach, Five Finger Death Punch, In This Moment) imprint can be felt up and down these six tracks – “Euthanize” is a strong opener that would sound just as electric being belted out from the stage of a small club or a massive amphitheater, lead single “Area” has a future at rock radio thanks to a true earworm hook, album standout “Becoming” is about as FFDP as Ataraxis gets with driving, bombastic grooves, “Rorschach” puts the metal in modern metal with screaming exhortations, stomping riffs and booming cymbal crashes and the title track shows Zero Theorem can exist just as coherently in a slower paced setting, sounding like something that would close out most metal albums. On closer “Low,” the band transforms into Fozzy with Cesar playing the role of the venerable Chris Jericho, going from commanding refrains to snarling accents amidst churning guitars and big hooks.

You’d be hard press to find a better way to spend 20 minutes today than with Zero Theorem’s Ataraxis. While it’s only half a dozen tracks, the problem is once you listen to Ataraxis, you’re going to want to listen again and again. And then again and again.