When It Comes To Royal Psalms, They “Could Have Been Anything” 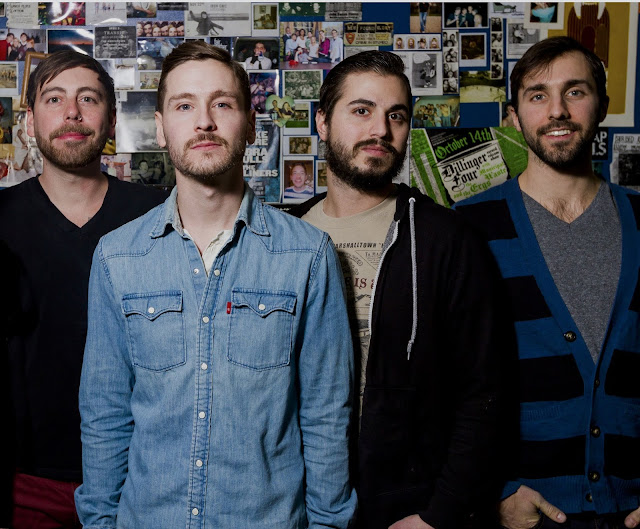 Daytrader, Crime In Stereo, Aficionado – what do these bands have in common? Royal Psalms, that’s what. The band is comprised of former Daytrader guitarist Gary Cioni, Crime In Stereo bassist Eric Fairchild, Aficionado vocalist Nick Warchol and drummer Joseph Ruotolo, so if you were a bit confused, there you go. The band also has a collective EP under their belts, I Could Have Been Anything.

If you want to learn more about Royal Psalms, then this is the place to do so. Former Daytrader guitarist Gary Cioni shed some light on the origins of the band, landing with Rise Records, the ins and outs of I Could Have Been Anything and what the future holds for the band, which he admits both is and is not a full-time band.

Get eXposed Music: That’s one hell of a collective resume for the band. Tell us, how did this band first come to be? What’s the origin story of Royal Psalms? (Sorry to go all comic nerd on you).
Gary Cioni: Nick [Warchol] and my former bands used to play together pretty regularly, we both liked each-other’s bands and both bands broke up around the same time. We had casually talked about starting a project together, but it initially didn’t get much further than talk. I then started jamming on some ideas with Eric who I am also in Crime in Stereo with, and that’s when it started to come together. We got Nick to come down to Brooklyn and that’s when things took off from there.

How did you come to find a home at Rise Records? Obviously the music has something to do with it and we’ll get to that, but how much did the prior affiliations of the band members play into it?
We recorded the record on our own and initially the plan wasn’t really based around being on a label or getting signed. To be honest I think we would have all been pretty content to put the record up online for free. This is where the prior affiliations come in. My last band was on Rise, I have come to know and trust the people there over the years. I sent them the record and they wanted to put it out, so we were happy to fore go internet DIY and join the Rise family.

Tell us about the recording process of I Could Have Been Anything. You’ve all logged time in the studio in your careers – did that make the recording of this album a pleasurable experience? Was it easier this time around for you guys?
It was actually quite different from any other recording process any of us have ever been involved in. This EP was recorded over almost a year in infrequent, short bursts. We recorded the drums and bass guitar over a weekend in February 2014. A month later I tracked my guitars, a few months later we finished the instrumentals, etc. Our good friend Robert tracked most of the record in our practice space in Brooklyn, he lives out of state so we would just grab him a few days at a time when we could until it was done. Our collective studio experience in other projects definitely helped us self-produce the record. The least pleasurable thing about the experience was the amount of time between sessions.


Now that the EP has been released and all of the work that went with it is behind you, is I Could Have Been Anything the record you hoped it would be?
I think we are all very happy with the end result of the record. We are definitely looking towards the future already though. I don’t think we really knew exactly what we were going to sound like until the record was finished. Now that we have a better understanding of our sound we are all excited to write a full length together.

How would you sell this record to someone who has never heard your band? What can [potential] fans expect from this album?
Honestly, I don’t know. I like to think of us as just a rock band. Royal Psalms is the first band I’ve ever been in that my dad likes so maybe we can be the “defend dad rock” band?

Is Royal Psalms a full time band?
In a sense yes, in a sense no. We are a full time band in the meaning that we will be frequently performing live and releasing new music. But at the same time we are not going to be spending eight months a year on tour.

More Royal Psalms goodness can be found over at https://www.facebook.com/royalpsalmsband.