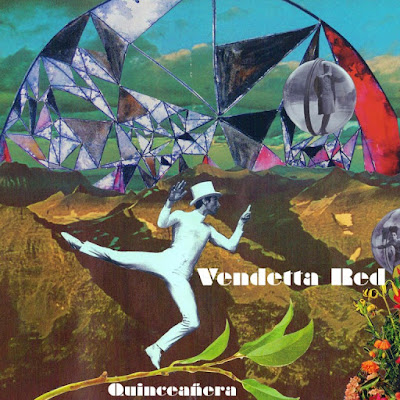 After spending 13 years in relative anonymity, Seattle’s Vendetta Red have returned from the void with Quinceañera, their first full length since 2005. And much to their credit, and seeing as how only half of the band remains from 2005’s Sisters of the Red Death, they don’t sound like a band that hasn’t written and recorded a record in well over a decade.

Quinceañera finds the veteran outfit shedding most emo/screamo/post-hardcore affiliations they may have once been tagged with in favor of straight up alt-rock (“Wild and Dangerous,” “Encantado”), though if you know anything about Vendetta Red, it’s that any sonic form they take is going to be awash in all things alternative. Opener “Swim” is about as close to “Shatterday” era Vendetta Red (check out their excellent album Between the Never and the Now) as Quinceañera gets, though there’s a deliciously noisy interlude near the finish of “The Dreamers.” “Where There’s A Will, There’s a Pinche Guey” is a manic number driven by punchy riffs and Zach Davidson’s spastic vocal delivery and while “West of Birmingham” is fun as hell and leveraged to the hilt with ‘woah oh’s,’ the album hits a bit of a lull midway through. It recovers nicely after a short down period with a trio of strong tracks late in the album - “Acquiesce” delivers Quinceañera heaviest guitar-drum breakdown in between angular alt-rock hooks, “Til You Have Forgotten Me” drifts into The Killers territory with a bit of electronics introduced into the mix and big guitars return to close Quinceañera out on album highlight “The Circle.”

Quinceañera isn’t always perfect, nor does it need to be honestly. At times its gritty, at times it’s relatively seamless, but it never sounds out of place, especially given today’s alt-rock renaissance. Vendetta Red isn’t the same band they were in the mid-oughts and truthfully, they’re better off.

Go Download: “Where There’s A Will, There’s a Pinche Guey”