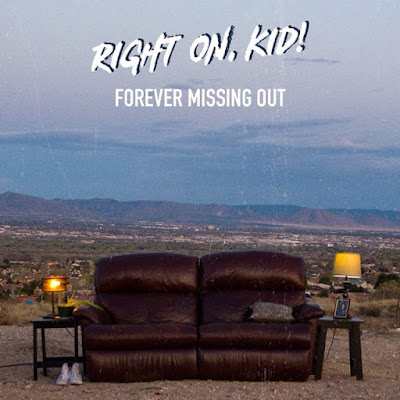 As we inch closer and closer to summer (it’s coming, we promise), it’s time to get those sunny day soundtracks in order – you know, those mixtapes that you crank to 11 while sitting by the pool, playing cornhole and/or Kan Jam (hopefully both), sitting by the fire or just cruising with the windows down. And if you’re anything like us, those playlists are often dominated by pop-punk and we’re now making room for Right On, Kid! thanks to their latest release, Forever Missing Out.

After the opening title track sets the table, “Clarity” amps things up with reverent guitar tones, hyperactive snare drum play and even some dissonant screams tossed in for good measure. “Bier Castle” hits like an early morning Starbucks Venti Caramel Macchiato straight to the veins - a potent, no nonsense injection of pop-punk that clocks in at just over a minute, the aptly titled “Consistent” is just that – a prototypical, and yes, consistent, pop-punk anthem and Right On, Kid! save the best for last on “Loci,” a familial blast of energy that sounds more like early Senses Fail than anything else. This track could have easily found a home Let It Enfold You.

Forever Missing Out’s five tracks and 15 minutes freaking fly by, so what are you waiting for?