Karabas Barabas – “Sex With The Devil” 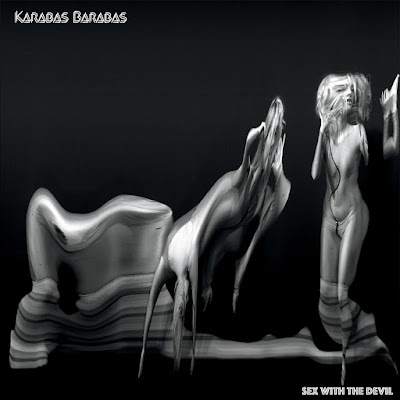 If you were to envision a soundtrack to Hell, a number of bands quickly come to mind – Slayer, Pantera, Gwar, Death, Danzig – and the list goes on and on. But one you artist that could easily slide into that track list is Karabas Barabas, thanks to their latest release Sex With the Devil, a tribute to glam and sleaze rock done in true Electric Six, Foxy Shazam avant-garde excess.

If you were to try and sum up the essence of Sex With The Devil in one track, you could point to “Fuckarana,” a quick and dirty, two-minute tribute to the Los Del Rio’s timeless “La Macarena.” But don’t just take Sex with The Devil at face value, as this album, much like a pungent onion, reveals more and more pure goodness with each peeled layer. “You Can’t Do That” tells an incredibly irreverent fable set to a funky tune driven by some throbbing bass work, the title track plays like a soundtrack to a b-horror movie, “Lahey” pays homage to late Trailer Park Boys actor John Dunsworth (who played the character Jim Lahey on the cult favorite show), “50/50” is every bit the definition of wacky, but it’s catchy as all get out, beyond it’s incredibly odd lines, closer “Jacques Lemaire” is a high quality jam, “That 70’s Song” bounces likes nothing else on Sex With The Devil and “Immaculate Convection” might be the most bizarre song you’ll ever hear.

If you’re into something entirely different, look no further than Karabas Barabas’ Sex with The Devil, because there is a very good chance you’ve never heard anything like this before. And we should all do our part to keep music weird, right? Because if Karabas Barabas is doing nothing else, they are sure as hell doing that.