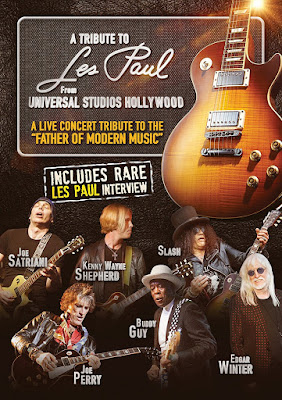 Les Paul needs no introduction; his work and his impact are truly unparalleled. His influence on the music world will forever be felt; his legacy is everlasting and deserves to be recognized whenever the opportunity arises. Enter A Tribute To Les Paul: Live From Universal Studios Hollywood, a star-studded, one-night tribute to an icon. Filmed live at the Gibson Amphitheatre in Los Angeles on February 8, 2006, A Tribute To Les Paul: Live From Universal Studios is an unforgettable night, headlined by a show stopping rendition of Stevie Wonder’s “Superstition” by Slash, while smoking a cigarette, and Edgar Winter. Slash’s mastery of the Gibson Les Paul guitar takes center stage just over a minute into the track, and Winter is no slouch thanks to a powerful vocal delivery and silky smooth saxophone interlude. That’s not the only standout here as Toto’s Steve Lukather brings the six-string heat on Jimi Hendrix's "Little Wing" and Joe Perry and Buddy Guy also bring the house down. Other highlights include performances by Joe Satriani and Neal Schon.

Slash, who tells a great story about Paul wiping the stage with him at a show they once played together at the Roxy, Schon, Robben Ford, Kenny Aronoff, Lukather, and Winter are among those who pay their respects to Paul and his contributions to music, but its hearing from the man himself, Les Paul, taken from his final interviews recorded at his home in Mahwah, New Jersey, that’s the highlight of the interview portion of the DVD. His Gene Autry story is just tremendous. Paul even lists some of his favorite guitar players to watch (sorry, no spoilers).

And on top of all that, the special event was held to raise funds and awareness for the South Central charity A Place Called Home, designed to give at-risk youth a safe and secure environment they can thrive in. What better way to honor a man that has given so much to something we all love.