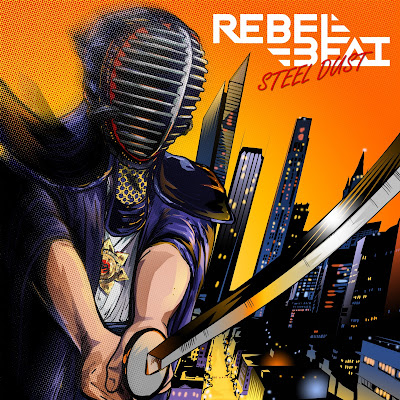 Rap rock has become something of a punch line as of late, thanks in large part to Limp Bizkit and the like; a genre that most often looked at as a four letter word than anything else. Fortunately for Rebel Beat, they fall more in line with the rap rock stylings of Hollywood Undead than anything else, much to the benefit of their debut full length Steel Dust. Rebel Beat waste no time in showcasing what they’re all about on opener “I’m The Law,” a true piece of rap rock that sounds a bit Kottonmouth Kings-esque, but from there, Steel Beat is more than a mere paint-by-numbers  genre entry. The album leans closer to Linkin Park-Hybrid Theory territory with crunchy riffs, gigantic hooks and rap accents (“Swinging Around,” “Red Rock,” “Steel Dust,” “Ferguson”). Rebel Beat also isn’t afraid to get heavy as evidenced by “Melody,” which features by far the albums heaviest guitar work. Not all of Steel Dust is up to snuff however (“One Man” is ultimately forgettable by the end of the record, “Away” seems lacking by comparison). Luckily for Steel Dust, its’ forgettable moments are very few and far between.