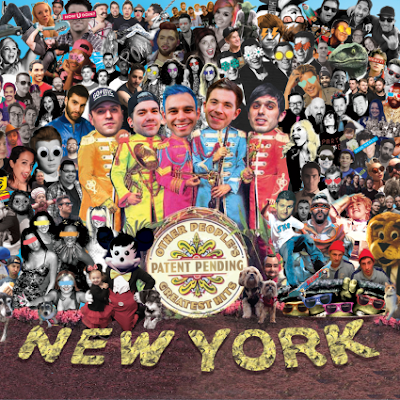 When it comes to covers albums, fun is the name of the game, a memo Patent Pending clearly received and took to heart on their latest, Other People’s Greatest Hits, all the way the down to the album art, which features the heads of the five band members super-imposed onto the Beatles iconic Sgt. Pepper and the Lonely Hearts Club album cover. Other People’s Greatest Hits is a freight train of fun, starting with a bizarre yet splendid pop-punk mashup of Tiesto’s “Wasted” and Avicii’s “Wake Me Up,” which is better off heard than simply read about and like Heath Ledger in 10 Things I Hate About You, Patent Pending transforms Frankie Valli’s timeless hit “Can’t Take My Eyes Off You” into a stadium rock anthem. Other People’s Greatest Hits isn’t a complete effort in jest either, as the band presents a number of pretty perfect takes, including a masculine take on the Spice Girls’ “Spice Up Your Life,” spot-on renditions of Rick Astley’s “Never Gonna Give You Up” and Ricky Martin’s “Livin’ La Vida Loca,” and a surprise highlight in Joe Bellion’s “All Time Low.” Elsewhere, Patent Pending somehow manage to transform The Killers’ “Mr. Brightside” into Andrew W.K.-lite, get sexy during a silky take on Ed Sheeran’s “Shape Of You,” and succeed in making Miley Cyrus sound good with the closing “See You Again.” Other People’s Greatest Hits doesn’t take itself too seriously and it’s a better album because of it.