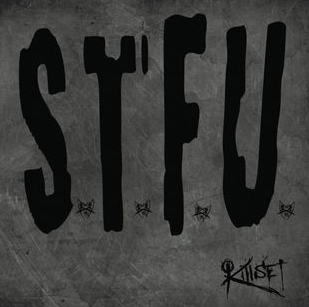 It’s no secret that nu-metal died a long time ago. But apparently no one told KillSET. Even though the much-maligned genre has become a punchline and the butt of many jokes nowadays, this rock outfit is helping to lead the charge of a mini-nu-metal revolution. While their latest, S.T.F.U. gets off to a slow start (opener “Get Up” is worth four minutes of your time), it picks up steam as it rolls on “Tomorrow,” a destructive force of rap metal verses and stomping screams. KillSET transform the innocent and breezy early-90’s R&B vibe of Kris Kross’ “Jump” into something intrinsically dangerous, vocalist Luca shines on “How Dare You” and “Animal,” showcasing his full arsenal, from lofty melodies and rap interludes to aggressive outbursts, token ballad “Not A Love Song” provides a late highlight and closer “Don’t Let Me Die” is an explosive smattering of guitars, deep bass lines and intense vocals. There’s some bumps along the way on S.T.F.U. but there’s some good to be found here if you’re willing to look for it.

yeshayacai said…
Nonetheless, connecting with these web sites could 파라오바카라 be unpredictable, as the government tends to ban entry. Since taking part in} at on-line casinos is technically illegal in South Korea, there aren't any legal guidelines about taxes on winnings from such websites at present. You might discover it uncommon to think that there can be any on-line casinos offering native Korean customer assist, but it is indeed the case all of the same! Just as many on-line casinos on the market are happy merely accept|to simply accept} players from South Korea, lots of them have gone as far as offering customer assist in Korea. This is an ideal situation because it means if you do run into hassle on the website, {you can get|you will get|you might get} things sorted quickly and easily in your language. At South Korea-friendly on-line casinos is often out there for these players to claim.
November 7, 2022 at 12:28 AM