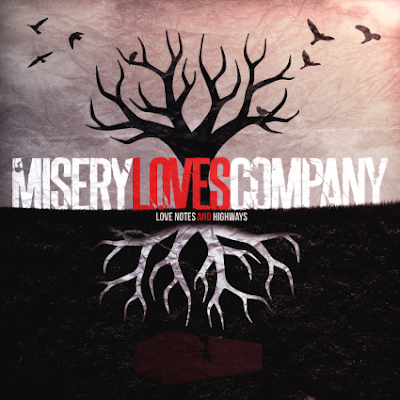 Following in the footsteps of another three-worded emo rock outfit from New Jersey, Misery Loves Company’s debut EP Love Notes and Highways brings back all the mid-ought’s feels  of My Chemical Romance’s Three Cheers To Sweet Revenge  and I Am Ghost’s Lover’s Requiem. All those memorable feels quickly come flooding back during the first minute of “All Used Up,” a perfect harbinger of things to come on Love Notes and Highways – churning riffs, unrelenting percussion and inescapable hooks that will easily get stuck in your craw (lead single “Dead and Buried” is unavoidably catchy thanks to soaring melodies that jump off the record, “Goodbye Forever” ups the amplitude of Love Notes and Highways, augmenting the EP’s formula with scores of tense wails, “To Whom It May Concern” is the album’s heaviest outpost and also its darkest as the band details bludgeoning someone and putting them six feet underground (‘screaming in pain as I carve at your face, begging in the name of God,’ vocalist Jimmy Ruggiero proclaims). If MLC are to release another single from Love Notes and Highways then there’s a good chance its closer “Beautiful Tragedy,” which may be this EP’s most well-rounded track. You only get one chance to make a first impression and with Love Notes and Highways, Misery Loves Company knocked that shit out of the damn park.