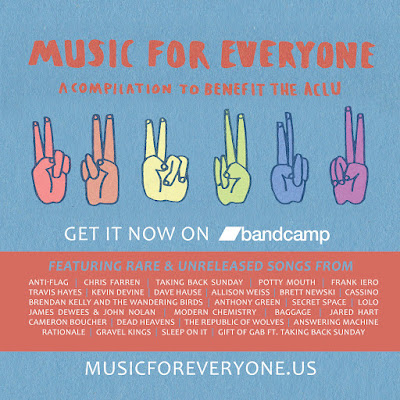 Music is great in its own right, but when it’s used to make a positive change, to help give back and ultimately create more good in this world, that’s when it’s true power shines through. The Music For Everyone compilation is one of those intersections where good music and an even better cause meet, as proceeds from album sales go to directly benefit the American Civil Liberties Union (ACLU). Compiled by Taking Back Sunday's John Nolan with help from Collective Confusion Records, Hopeless Records and the Sub City, Music For Everyone unites artists who have provided rare, unreleased and/or brand new music to voice their concern about the current political landscape. With this cause, it would stand to reason then that political punkers Anti-Flag kick things off with “Buried The Shame,” a quick and to-the-point burst of good ol’ punk rock. There are plenty of highlights throughout Music For Everyone’s 27 tracks; Taking Back Sunday emotionally breaks things down in a way only they can on “Just A Man” before returning to supply the musical bed for Blackalicious’ Gift Of Gab on the superbly penned “When Justice Comes,” Anthony Green paints a sparse landscape on minimalist plucker “Spanish Moss,” a palpable feeling nearly matched by Secret Space’s “Point Of Change,” Frank Iero goes all Frank Iero on manic standout “Getting Into Heaven Can Be Hell,” Modern Chemistry shines on rocker “The OverThinker” and The Republic Of Wolves slow things down on the sullen “Birdless Cage.” Music for Everyone is an album can change our country. Literally.

The Music For Everyone compilation is available for a pay-what-you-want price with a minimum of $10 at https://musicforeveryone.bandcamp.com. For more information and testimonials from the participating artists on why they wanted to be involved, visit www.musicforeveryone.us.


Go Download: Frank Iero – “Getting Into Heaven Can Be Hell”