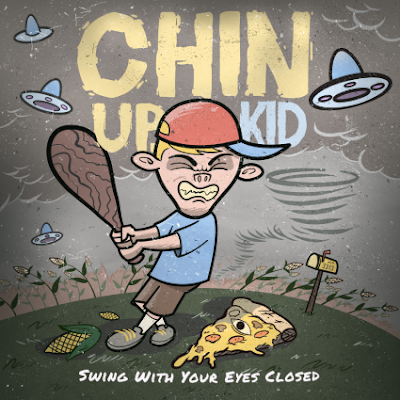 While on the surface, Swing With Your Eyes Closed, the major label debut (waddup Standby Records) from Chin Up, Kid, is a spunky release that’ll find a home between your State Champs and Knuckle Puck records, when you delve deeper, you’ll find that amongst the smattering of pop-punk norms, Swing With Your Eyes Closed is a pained record; full of songs penned on angst and broken hearts (“No Regrets,” “Swing With Your Eyes Closed,” “Turning Point,” “Expectations”). The band morphs into A Day to Remember on the vitriolic “Your Fault, Not Mine,” which finds the band spitting spiteful bars like ‘I’m not the one who took things too fucking personally, you’re fault, not mine, don’t pin this on me, for once in my life, I can look down on you, embrace the feeling, the hate that it brings, I hope that it stings, you won’t be coming back’ and ‘you’ve crossed a motherfucking line,’ accompanied by galloping leads and crunchy hooks. Chin Up, Kid keep their foot on the gas on the closing “Yesterday,” which features some killer gang vocals and Jeremy McKinnon-esque growls, ending Swing With Your Eyes Closed on a memorable note.