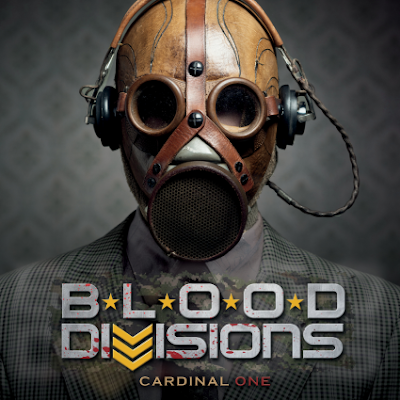 Expanding on their 2015 eponymous EP, Blood Divisions, a supergroup consisting of a veritable heavy music who’s-who like Chris Jericho (Fozzy), Dave Austin (Nasty Savage), Ralph Santola (Death, Obituary, Testament), Terry Butler (Obituary, Death), Greg Gall (Six Feet Under), Bill Owen (Purgatory), Ben Meyer (Nasty Savage), Ed Aborn (Intersonic Cyber Symphony) and Ken Andrews (Obituary) to name a few, Cardinal One adds a pair of instrumental originals and another pair of covers to the mix. In addition to Nasty Savage’s nine-minute oeuvre “The Morgue,” a track that sees Jericho go from subdued whispers and hushed refrains to snarling rebel yells and impassioned battle cries and the Scorpions’ straight up hard rocker “Top of the Bill,” Blood Divisions cranks up the 80’s hair flare with their boisterous take on U.F.O.’s “Hot and Ready,” which has the band sounding like KISS in all their Lick It Up excess and put all of their combined metal mastery in motion on the album’s second Nasty Savage cover “No Sympathy,” a six-string shredfest that features exhausting, blistering riffs and Jericho hitting the highest of falsetto notes. Of the two original works included on Cardinal One, “March of the Machine Elves” is an instrumental opus that runs the gamut of the band’s endless musical capabilities that turns downright demonic, while “Return to the Garden of Temptation” sounds plucked from some epic movie score. With Cardinal One, it’s clear that Blood Divisions are masters of their craft, and once again they have left us all wanting more.