Book Review: Defensive Eating with Morrissey: Vegan Recipes from the One You Left Behind 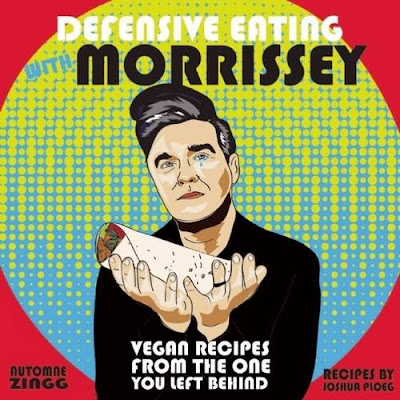 If you’ve listened to the Morrissey manifesto at all throughout the years, you know by now that meat is indeed murder. So he would make the perfect face for a vegan cookbook, right? Well, Automne Zingg and Joshua Ploeg sure thought so, casting him as the poster child of their vegan recipes collection, Defensive Eating with Morrissey: Vegan Recipes from the One You Left Behind. Yes, that book title is certainly a mouthful, something you’ll surely have after flipping through these 50+ concoctions. The smartly curated recipes, featuring punny titles like ‘Boy With The Corn In His Side’ (a corn on the cob recipe that pays homage to “The Boy With the Thorn In His Side”) and ‘Peas Let Me Get What I Want’ (a play off the Smiths’ classic “Please, Please, Please Let Me Get What I Want”), as well as hilarious titles like ‘Paula Deen,’ ‘Guy Fieri’ and ‘The Internet’ (not even to mention all of the wonderful ‘Morrissey Ate  All…’ names), each accompanied by an incredibly unique illustration, like Morrissey tying up celeb chef Guy Fieri, drowning in a sea of baked beans and appearing alongside the likes of Judge Judy, Freddy Kruger, Garfield the Cat, the Queen of England and The Cure’s Robert Smith. Defensive Eating with Morrissey: Vegan Recipes from the One You Left Behind is witty, entertaining and informative, all while keeping you eating right. If you’re vegan, then buy this for the recipes, if not, then buy it for the sheer hilarity. It’s been a long time since the Moz has been this entertaining.

Email Post
Labels: book reviews Defensive Eating with Morrissey: Vegan Recipes from the One You Left Behind morrissey