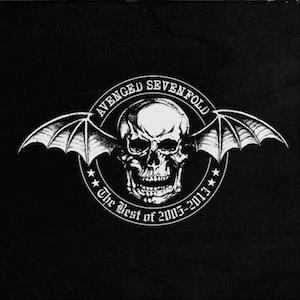 When it comes to Avenged Sevenfold’s The Best Of 2005-2013, you know the players and most of the plays in the playbook, but that doesn’t make this collection any less remarkable. From the slick pop metal of City Of Evil’s “Bat Country” and “Beast and the Harlot,” which put A7X on the proverbial map, to the modern power metal of Hail to the King’s “Shepherd of Fire” and “Hail to the King,” The Best Of 2005-2013 chronicles the band’s time spent with Warner Bros. Records. While there’s also five cuts off breakout album Avenged Sevenfold (“Critical Acclaim,” “Almost Easy,” “Afterlife,” “Dear God,” “A Little Piece of Heaven”) and a few from Nightmare  (including the bands brilliant tribute to late drummer The Rev, “So Far Away”), the gold to be mined on The Best Of 2005-2013 comes in the form of a trio of covers; a gritty and bombastic take on Pantera’s classic “Walk” and a worthy tribute to Iron Maiden’s “Flash of the Blade” (both taken off of 2008’s Live in the LBC & Diamonds in the Rough), as well as a fairly spot-on remake of timeless Black Sabbath tune “Paranoid.” And then add to the mix both of the bands entries into the Call of Duty video game franchise, “Carry On” (Call Of Duty: Black Ops II) and “Not Ready To Die” (Call Of The Dead), to cap things off, you have an album in The Best Of 2005-2013 that’s pretty damn impressive.