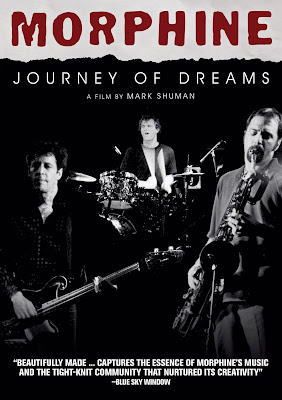 Morphine: Journey Of Dreams, which tells the story of indie rock darlings Morphine, is a lesson in how fleeting life can be. Hell, the film took director Mark Shuman five years to make, roughly half of the bands decade of existence (the band disbanded after frontman Mark Sandman’s tragic passing in 1999 due to a heart attack). Shuman tells the story of the band via archival photos and hundreds of hours of video footage, but it’s the surviving band members, Dana Colley and Billy Conway, who steal the show with their remembrances of Sandman, both as a man and a bandmate. And that’s certainly saying something considering the likes of Henry Rollins and Joe Strummer, who relays a hilarious story about he met the band, stop by to offer their thoughts. Colley shares many of his Polaroid pictures and Super 8 films from Morphine’s touring days, which serve as a definite highlight, though the high point of the film has to be the rare performance footage that’s included, which is priceless to be completely honest.  Morphine: Journey Of Dreams succeeds as both a love letter to a band that never got the love they deserved and a tribute to Sandman’s enduring legacy. It’s the most comprehensive telling of Morphine’s story we’ve seen yet, a band that may be long gone, but certainly not forgotten.