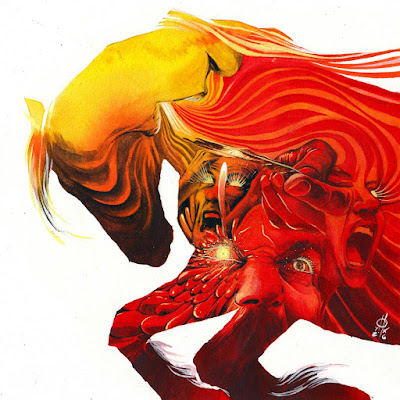 No offense and with all due respect to Slaves On Dope’s 2003 album Metafour, an album that houses some of the best vocals frontman Jason Rockman ever laid to wax, Horse, the band’s latest, would have been a better follow-up to 2000’s Inches From The Mainline. While on Metafour the band suppressed most of their screamy, angst-ridden vocals in order to concentrate more on melody, Slaves on Dope seem to have found a perfect sonic middle ground on Horse with steady doses of Rockman’s gravelly-throated barks and guitarist Kevin Jardine’s wah-wah-laced churning riffs (“Electric Kool-Aid,” “P&P”) and tempered offerings that shine the light on Slaves on Dope’s penchant for crafting striking hooks (“Freebasing,” “Disco Biscuit”). Slaves on Dope pull out all the stops on Horse, including bringing out Run DMC’s Darryl McDaniels on “Script Writer,” one of the albums most memorable moments, where he shows he is still at the top of the rap game. And as for guest appearances, that’s far from it as Mastodon’s Bill Kelliher lends some six-string love to the sludgy and mountainous “Interplanetary Mission,” legendary Bad Brains frontman H.R. delivers the grime on the menacing “Liquid Sunshine” and songstress Lee-La Baum adds a unique vocal dynamic alongside Rockman on “Codependency.” The idea of hope resonates throughout Horse, dripping off each word from the now decades-sober Rockman. After nearly a quarter-century of Slaves on Dope being in the business, Horse is proof positive that you can in fact teach an old dog new tricks.