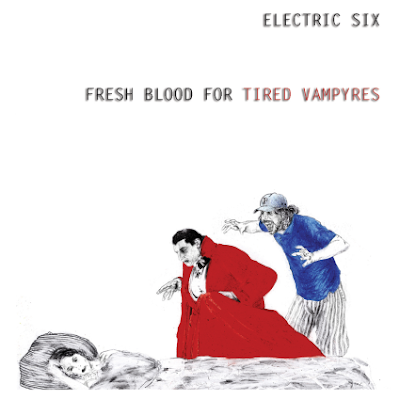 Electric Six’s Fresh Blood For Tired Vampyres is like a weather forecast – it’s constantly changing and nearly impossible to accurately predict. Actually, this record is a proper representation of the avant-garde band themselves, because those adjectives and phrases could just as easily be used to describe the Detroit-based outfit. Fresh Blood For Tired Vampyres is truly unconventional, irreverent and quirky, or basically anything and everything you’d want, and come to expect, from an Electric Six record (the hormonally-driven and sexually-charged “Mood Is Improving” is a weird and erotic R&B romp, “I’ll Be In Touch” is bouncy and unnervingly danceable, “My Dreams” is a greasy ode to sex and the like, “Lee Did This To Me” is an unexpected tribute to Tenacious D’s iconic track “Lee,” complete with the lines ‘you and Lee make three / you and Lee make three / you, me and Lee,’ the ubiquitously titled “The Lover’s Pie” is sexy nu-disco is all its glory). The oddly jazzy “(Be My) Skin Caboose)” is perhaps the strangest of the bunch, which is really saying something, paying homage, in part, to taking a dump. Yes, you did in fact read that right. Fresh Blood For Tired Vampyres is as bizarre as it is enjoyable, but above all else, this record is pure fun. What more could you want?