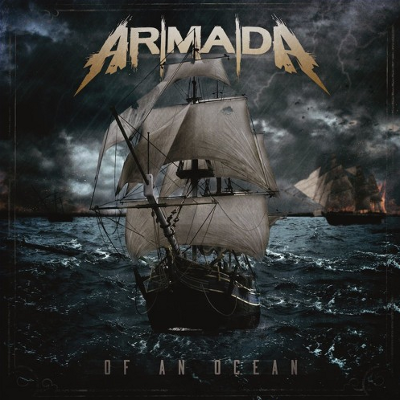 The old saying goes, ‘the whole is greater than the sum of its parts,’ which more than applies to Armada, who boast former members of Modern Day Escape, frontman James Vegas chief among them, and I Woke Up Early For My Funeral, and their refreshing debut EP Of An Ocean. First things first, Armada is nothing close to a sonic retread of those acts. Though there are some instances of paint-by-numbers metalcore here, Armada effectively masks those less memorable moments with a fresh coat of modern metal on Of An Ocean; the band comes out firing on all cylinders on infectious yet crushing opener “Like An Anchor,” early proof the band can pen killer hooks, which holds true on spastic lead single “Bury The Wolf;” Of An Ocean gets taken to the next level thanks to the explosive “The Fire The Flame,” a track driven by djent riffs that even Meshuggah would be proud of, closer “Riot The Kings” might be the sonic embodiment of Of An Ocean­, blending all its hallmarks – driving, pulsating rhythms, crashing riffs and striking hooks – into one song. Calling all fans of Atreyu, Throw the Fight and Memphis May Fire – Armada is here and Of An Ocean is a record you need to hear.