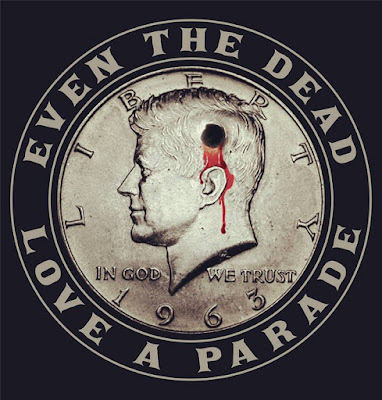 It only takes a few masterful downtuned notes of Even The Dead Love A Parade’s eponymous debut EP before a litany of sonic memories come flooding back (40 Below Summer, American Head Charge, Dry Kill Logic), one of which is Drowning Pool (think the Jason ‘Gong’ Jones era, 2004’s Desensitized), which makes a boatload of sense when you see DP bassist Stevie Benton listed amongst ETDLAP’s ranks. Even the Dead Love a Parade is Texas metal with all the pomp; caustic album primer “Cancer and Host” shreds eardrums thanks to stomping guitars and chugging grooves, “Humane” is as venomous as a Texas rattlesnake, scathing diatribe “Morphine Queen” comes complete with seething vocals that transition from vitriolic to tranquil and composed in an instant, “Sex Tapes” is littered with religious imagery and the EP’s sharpest riffs, “Heart Poacher” keeps things cranked until 11 until Even the Dead Love a Parade’s final note. Even though Even the Dead Love a Parade is only five songs long, this is a damn promising 22 minutes.