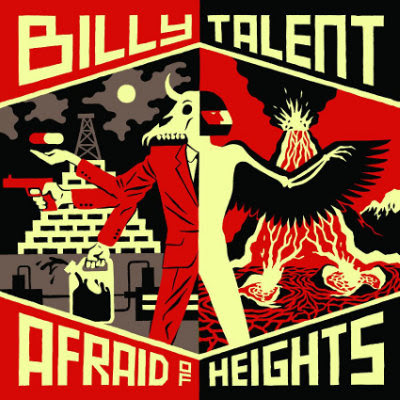 With Afraid Of Heights, punkers Billy Talent have released their best record since the mid-aughts, when they released the sparkling duo of Billy Talent and Billy Talent II
, an album that represents a shift for the band towards to the more mature end of the spectrum. Not only does Afraid of Heights feature some of the bands best songwriting to date; hard-charging “Big Red Gun” tackles the hot button issue of guns (‘We call them twisted and deranged / But we gave them the keys to annihilate / How long before the next one's in the crowd?’), weary epic “Rabbit Down the Hole” deals with the effects of drug addiction (‘Wander through the open door that leads to nowhere / Who's gonna take away my pain / Before you know you're trapped inside the spider's web / You're screaming there is no escape’), the aptly titled “This Is Our War” is a battlefield call-to-arms (‘Once there was a nation here / Now there is no more / Once we fought to change our fears / But now this is our war’), “Ghosts of Cannibal Rats” is one of the best songs Billy Talent has ever committed to wax, “Louder Than The DJ” is frivolous and bouncy fun and “Time Bomb Ticking Away” is purely classic Billy Talent. Despite it all, there’s some hiccups along the way (“Leave Them All Behind” falls flat when compared to the rest of the album, “February Winds” is simply sort of just there, “Horses & Chariots” is a bit too much Muse-like for its own good). As stunning as it sounds, after 13 years and five studio albums, Billy Talent might just now be hitting their stride. Afraid of Heights is a statement and it might be the bands best one yet.