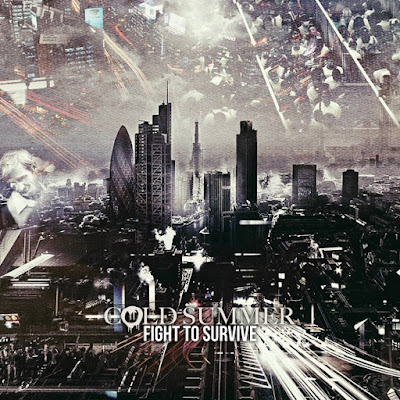 Following in the ample footsteps of post-hardcore’s early trendsetters like Boysetsfire and Hot Water Music (with just the right sprinkling of Snapcase influence), Cold Summer prove that old school is cool with their latest EP, Fight to Survive. Gritty vocals, angular guitars and an undercurrent of heavy atmospherics set the tone on Fight to Survive from the outset of opener “Bear Eats Wolf,” while the memorable and melodic “A Time Imagination Forgot To Inspire” perfectly builds, crests and crashes, incredibly raw vocals quarterback soaring hooks on the standout “Car Crash (In Progress),” “Coins Fall (But Don’t Make It)” sounds like a long lost b-side from Boysetsfire’s After the Eulogy and “Waiting,” perhaps Fight to Survive’s heaviest track, featuring the EP’s most menacing riffs (though the opening riff and vocal refrains of the closing “Something, Nothing, No – One” comes pretty damn close). Fans of both old school and new should flock to Fight to Survive, an EP that shows as much promise as any release you’ll hear anytime soon.

There are also many other ringtones. All ringtones are downloaded for free. To learn more about the latest ringtones, you can visit homepage: https://bestringtonesfree.net/

Đức Chu said…
If it comes to country music? What country would you think of? I will say is India. This country has a lot of good Bollywood music and movies. I love their music. I have collected free Indian songs here: Download Free Ringtones

What better way when you install it for free. Here are the songs I listen to most often and get the most recent ones:

Sophie Grace said…
This is a nice article you shared great information i have read it thanks for giving such a wonderful blog for the reader. There are wonderful blogs as yours on instagram, pease visit site piknu
February 20, 2020 at 11:28 PM