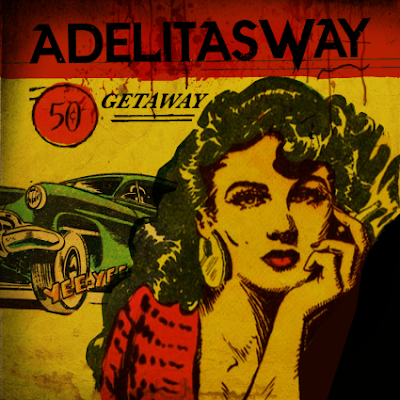 Featuring five tracks from their 2015 Deserve This EP, Adelita’s Way turned to the fans for help with Getaway, their fourth studio album, who, via PledgeMusic, funded the album, which features production from renowned rock producer Johnny K (Disturbed, Sevendust, Drowning Pool)(he also produced the bands 2009 eponymous record). On Getaway, frontman Rick DeJesus has never sounded better than on the bluesy, Southern rock-tinged “The Good Die Young,” and “Low,” far and away the albums best track, is a flat-out fantastic rock song, showcasing the bands ability to craft memorable hooks bursting with frenetic melodies and chugging guitars, while the band takes aim on the spiteful “Put You In Place” as frontman Rick DeJesus acerbically spits ‘I will put you in place / I will show you my rage that’s inside of me / I can feel it in my veins / I will put you in place / I will show you the way it all comes crashing down / You know you can’t stop me now’). Getaway is frontloaded, straying far too close to ‘butt rock’ territory as it progresses (“I Get Around” and “Filthy Heart” are largely throwaways, though the latter houses some truly great guitar work from Robert Zakaryan, the overt pop-rock of “Harbor the Fugitive” sounds out of place). While “Sometimes You’re Meant to Get Used” is pretty unnecessary, a combination of badass riffs and deep, twangy bass lines saves it somewhat. Thankfully for the sake of Getaway, the closing “Deserve This” rounds things back into proper form, thanks in large part to the wizardry of Zakaryan. Getaway isn’t Adelita’s Way best showing, but there’s certainly some treasures to mine.