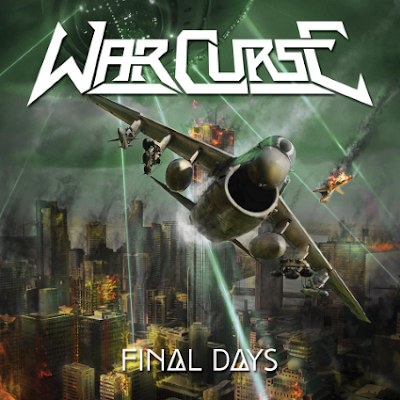 As frontman Tarek Puska defiantly proclaims 'I scream out with a battle cry as I raise my sword to the sky / And lead the men on as we charge / Some will die and some will starve / Few will live to tell the tale / Final rest on this deadly trail / Straight down the hill into the war / The last thing you'll see is the dawn patrol' on just Final Days opening track “Dawn Patrol,” it's evident early that War Curse is not fucking around. Final Days is a no-frills barrage of bombarding old school thrash metal that takes no prisoners, a six-song shoot-first-ask-questions-later chug fest teeming with nonstop riffs and unwavering gravel throated vocals ("Final Days" sounds plucked from Megadeth’s Rust In Peace recording sessions, “New Chemical Warfare” could have had a home on Metallica's Kill ‘Em All). “Severed Crosses” is the albums best offering, though the solo rich “Drudge” isn't to be missed either.  Final Days should be welcomed with open arms by fans of the afore mentioned bands and by fans of old school thrash (cough cough Anthrax fans cough cough) and at only six songs in length it should be relatively easy to dive into.