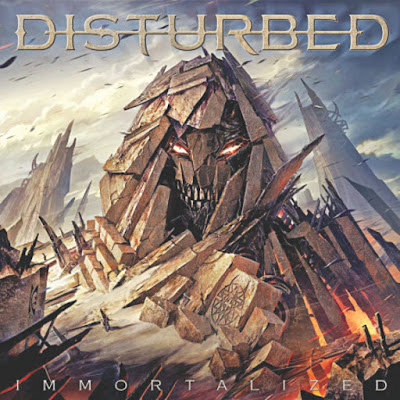 After five years spent in exile, Disturbed’s latest offering Immortalized falls more in line with 2002’s Believe than anything they’ve released in the last decade, though it’d be hard to not apply the old adage ‘if it ain’t broke don’t fix it.’ Time and time again throughout Immortalized Disturbed goes back to the well; quickly rediscovering the commercially viable formula that brought them to the dance – soaring hooks, infectious melodies, churning riffs (guitarist Don Donegan is the star of this record) and pounding percussions (“The Vengeful One,” “Immortalized,” “What Are You Waiting For”). Immortalized isn’t all just more of the same old Disturbed however, as the atmospheric “The Light” is a welcomed stylistic change of pace, a memorable track that helps breaks the monotony; the highly danceable “You’re Mine” sees the band stepping outside their comfort zone thanks to elements of electronica and darkwave; the band’s hushed and docile take on Simon Garfunkel’s “The Sound Of Silence” is wonderfully heartbreaking, very reminiscent of 2002 Believe closer “Darkness.” There are a couple of swings and misses here as well, namely the overdone mess that is “Save Our Last Goodbye” and the out of place “Fire It Up.” The long and short of it is, if you’re a fan of any era of Disturbed, this album is right up your alley because as with most everything this band has released, Immortalized is about as accessible as hard rock comes. Chances are, you’re going to either love Immortalized or you’re going to hate it, plain and simple.