CD Review: The Bunny The Bear – "A Liar Wrote This" (Victory) 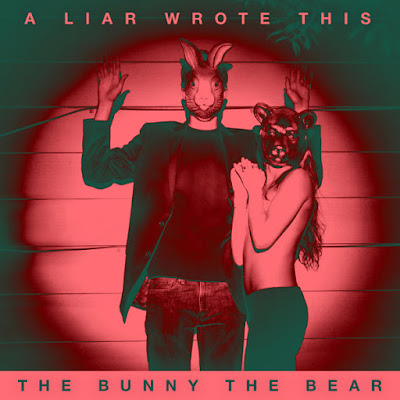 While it’s tough to see Chris Hutka (The Bear) leave The Bunny The Bear, the addition of Haley Roback (The Bear 4.0 (a female bear is called a sow FYI)) gives the band an entirely new look and feel, one that comes across closer to Eyes Set To Kill. The new vocal aesthetic between Roback and TBTB stalwart Matthew Tybor (The Bunny) is the driving force behind A Liar Wrote This, the band’s sixth studio release in the past five years. As with any fundamental shift, there are bound to be some growing pains, and A Liar Wrote This isn’t immune to that. Gone are the bands trademarked electronic flourishes and more danceable moments, replaced with mid-tempo entries that see Roback and Tybor showcasing their newly found vocal dynamic (“Dead Leaves,” “Curtain Call,” “Sleep Sequence”), though moments spread across A Liar Wrote This show it’s not all pomp and circumstance as they have quicken taken to this new female-fronted metalcore thing they have discovered (“Love, Trust and Compromise,” “Sick, Sad Eyes,” “Loose Lips”), the new take on “It’s Not Always Cold In Buffalo” is turn-of-the century nostalgia (Dreams Forever Drowning anyone?) and “Empty Hands” could just be the most emotional track this band has ever laid to wax. If nothing else, A Liar Wrote This will pave a new path for The Bunny The Bear, one which should open them up to a new fan base while providing some longevity to the act as well.