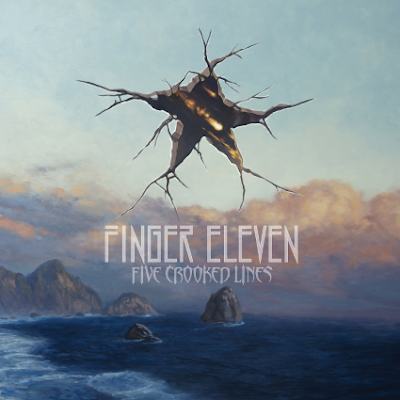 One thing Finger Eleven can always be credited for is the fact they have never completely abandoned their fondly remembered heavy beginnings. After revered albums Tip and Greyest of Blue Skies, there’s been tracks like “Stay In Shadows,” “Good Times,” “So-So Suicide” and “Don’t Look Down,” a trend that continues on Five Crooked Lines, the band’s first release in five years and first without longtime drummer Rich Beddoe (“Gods of Speed,” “Save Your Breath”). Another thing they can be credited for is their sonic evolution album to album, a sound is still evolving on Five Crooked Lines thanks to an influx of classic rock and heavy blues (“Criminal,” “Lost for Words”). By the time the band takes a ride in the way back machine and teleports to the 1970’s on the 7-minute-plus smoky jam “Come On, Oblivion” and singer Scott Anderson sings ‘fuck everything’ amidst hazy distortions and wailing guitars on the quirky and psychedelic “Blackout Song,” Five Crooked Lines wears a bit and fades towards the end. As any Finger Eleven fan can attest, this is not the Finger Eleven of old. Rather, Five Crooked Lines is another step of the evolution process that has followed this band since Greyest was released 15 years ago. Unlike some F11 albums in the past (we’re looking at you Them vs. You vs. Me, though “Paralyzer” still kicks ass), Five Crooked Lines surely isn’t an album written for radio, which is certainly commendable.