The Next Big Thing: The Nearly Deads Are Very Much Alive 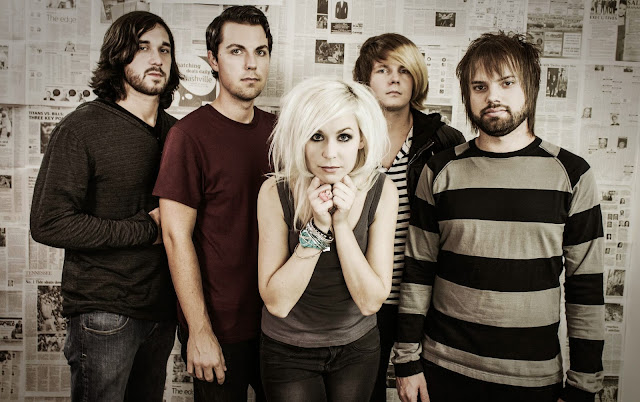 There is a good chance that the Nearly Deads are the best band going today that you’re not listening to. The band, who signed to Standby Records back in 2013, released their debut full length Invisible Tonight just last year (a great record which received high marks from us), and an equally as good EP, Survival Guide, in 2013 (another record we were big fans of) and have now cast off on the biggest tour of their young career alongside metal giants In This Moment, Butcher Babies and Upon a Burning Body. Their career trajectory is pointing in the right direction and it’s clear we’re all going to need our sunglasses handy because the future of this band is bright.
We caught up with the Nearly Deads firebrand Theresa Jeane, more affectionately known as TJ, to not only get the lowdown on all aspects of their current tour with In This Moment, Upon a Burning Body and Butcher Babies, but also to find out her place as a role model as a rock band frontwoman, hear some of her biggest female inspirations, whether or not the band is writing new music on the road and her thoughts and views on crowdfunding. 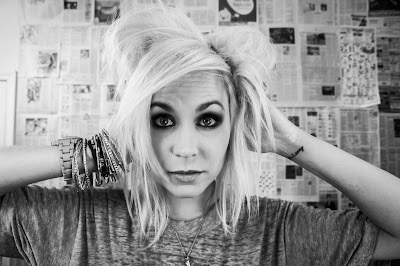 Get eXposed Music: What does it mean to you to be on tour with powerful female acts like In This Moment and Butcher Babies? Does it make this tour that much more special to you personally? Or is it just a case that this is just another tour and this is who you happen to be touring with?
Theresa ‘TJ’ Jeane: I am thrilled to be a part of this tour! I look to all these women for inspiration, not only as performers, but from a career standpoint as well. The Nearly Deads are just getting started, and we know we still have a long way to go, so I’m hoping to learn a lot. It’s an honor to be a part of a tour with two female-fronted bands that are changing the game and really paving the way for the future of metal and rock, not just female-fronted rock, but rock in general! Of course we’re also excited to perform with Upon A Burning Body! This will be the largest tour we’ve ever done and we can’t wait to get out there, kick some ass, and show everyone what TND is all about.

Suffice to say you’ll be pulling out all the stops for this tour? What can you tell us about what concertgoers can expect from The Nearly Deads?
You can expect us to get you moving! Don’t come to this tour expecting to stand around because this incredible lineup is all about pure energy from start to finish! It’s our job to make the people coming out to these shows who have no idea who we are leave feeling like they just discovered their new favorite band. Come ready to circle pit, fist pump and generally raise hell.

How have the crowd responses been thus far for The Nearly Deads? Positive or otherwise?
Every time we have the opportunity to play to a larger crowd, we are completely overwhelmed by the positive responses we get. We have the best fans in the world and we can’t wait to see them all out on this tour, and hopefully make a lot more in the process! Last year, we played over 100 shows independently, and all that touring meant that we made some true friends out of people who started out as fans. One thing is clear: lovers of rock and roll, metal, and music in general are some of the most amazing, positive people I’ve ever met. We couldn’t be luckier to be doing what we’re doing. 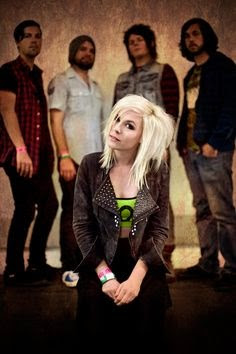 When you were first given the slot on this tour did you have any reservations that perhaps your music wouldn’t fit with the rest of the bands on the tour? Or did that not even cross your mind?
I’m not going to lie; it crossed my mind initially, but soon faded into excitement. Would the fans like us? Of course they will! Is our music heavy enough? Hell yeah it is! Then I remembered, every single band on this tour was the opener at one point and I got inspired. I want to show people what we’re made of. Our style is anything but metal, but we still rock out just as hard.

Are you guys taking any time to write new music while on the road?
We will be bringing the acoustics and working on some new songs, yes. We want to spend the year focusing on touring and being on the road is always a great source of inspiration.

You released your fantastic full length Invisible Tonight last year. Looking back, now nearly a year since its release, is this the album you set out to record – is this the album you wanted after all of the hours logged in the studio? In other words, is Invisible Tonight the introduction to the masses that you hoped it’d be? How did the record turnout in your eyes?
We are incredibly proud of Invisible Tonight. It really did turn out exactly how we wanted it to. The effort that goes into something like this is always worth it. That’s what I love about the music we make, it’s genuine. The lyrics are straightforward, I’m not hiding anything. Every emotion about making this record, about coming into my own as the frontwoman of this band - it’s all right there. It feels good to be able to put that out there and share our story, and hopefully the fans can interpret the lyrics into their own personal journeys as well.

Invisible Tonight was made possible thanks to a highly successful Kickstarter campaign that saw you raise over 20 percent of the goal in one day. What does it mean to you that your fans are that invested in your successful and that eager to hear new music from the band?
I’m pretty sure I cried a little bit when I started seeing the pledges coming in so fast! I’m always so overwhelmed that so many people all over the world care about our music and want to see us succeed. Kickstarter is an amazing platform for artists like us and it felt amazing to fund this record with the help of our fans. It feels like we all truly own it together. A few years ago I never would have imagined raising so much money for something like this, so I was honestly surprised at the response. It gives a real sense of purpose to what we do, and it reassures us that we are on the right track.

Is crowdfunding a source that you might go back to in the future or do you see it as sort of a one-and-done thing?
We’ve actually done more than one crowdfunding campaign and the response has been incredible. A few years ago, we were running low on money in the middle of our first nationwide tour, so we set up a quick Indiegogo campaign with a goal of $2,500. We ended up doubling it and our fans helped us raise $5,000! I think we will definitely use it again when the time is right. Crowdfunding is amazing. The band gets the support and the money to fund their dream, and the fans get some really cool experiences in return. One Kickstarter donor I will never forget…we had been trying to get him backstage at a show, but the shows in his area kept getting canceled. Finally we just decided to go over to his house, play an acoustic set for him and hang out all night. It was one of the best nights we’ve ever had as a band. Our fans really do become our friends! 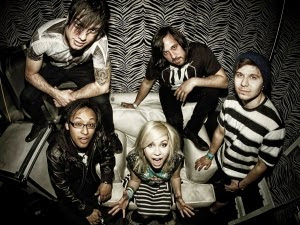 Any plans in the works for after this tour wraps? Anything you can tell us?
We are beyond excited to be a part of the Fashion Meets Music Festival Sunday, Sept. 6th in Columbus Ohio! The headliners on our night are Lights, Taking Back Sunday, and Awolnation. We’ve got our eye on a few more big festivals for the summer, and we plan to spend the rest of the year touring!

With so many empowering female figures fronting successful rock bands nowadays – Lzzy Hale and Halestorm, Kristen May and Flyleaf, Taylor Momsen and Pretty Reckless just to name a few – is now the best time to be a female lead singer in a rock band? Do you at all consider yourself a role model for young females who might want to do what you do when they grow up?
I think it’s always the best time to be a female lead singer in a rock band! I personally look up to Brody Dalle, Shirley Manson and Gwen Stefani. There have always been a lot of strong female musicians, and it’s awesome to see it back in the forefront of the music world. All we want is to be treated like any other band out there. I have always tried to be a role model, not just for aspiring singers, but for young women in general. I want them all to know that they can be whoever they want to be, and that someone out there will always care about them. I want them to value themselves and see the world in a positive light, even when things seem rough. It’s very humbling to hear a story about how our music helped someone through a rough time in their life. It gives meaning to what we do, and our fans mean the world to us!