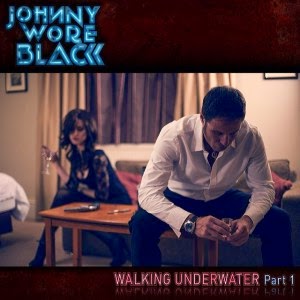 Dark, ruminating and melodic, Walking Underwater Part 1 is each of these things. Helmed by former Hollywood stuntman Johnny Jay (Jay Coen), Johnny Wore Black closely resembles the brooding alt-rock of the early to mid oughts, and Walking Underwater Part 1, their debut full length, is fueled by such, led by gloomy, atmospheric malaise by the droves (“So Dusted,” “The Battle,” “Cold Water,” “Different Shades”) and exquisitely sublime subdued melancholia (“One & The Same,” “What Am I,” “One Love Song”). Fervent entries such as “All The Rage” and “Up In Flames,” the latter more so than the former, work to balance the proceedings a bit while providing the albums top melodic moments. And as if you needed more reasons to dig on the former, “All the Rage” was written in support of Help For Heroes, a UK charity to help wounded British military members. The band saves one of their best for last in “Outside Looking In,” a fuzzy up-tempo closer driven by infectious, swirling guitars. The production contributions of David Bottrill (Tool, The Smashing Pumpkins, Muse) can also be felt throughout Walking Underwater Part 1, and Megadeth’s David Ellefson is also credited as a songwriter and musician. On Walking Underwater Part 1, Johnny Wore Black also very effectively twist in samples culled from the 1967 documentary ‘The London Nobody Knows,’ which, unlike most uses of samples, work to tie the album together and provide a certain ebb and flow. While Johnny Wore Black may be a bit avant-garde, Walking Underwater does enough to please fans of Radiohead and even those of Depeche Mode and maybe even Bauhaus.
Grade: C+
Go Download: “Up In Flames”