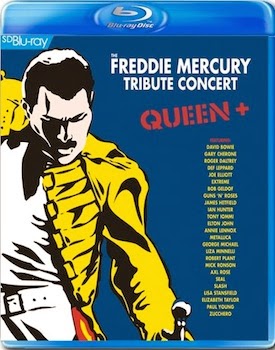 The Freddie Mercury Tribute Concert is a tour de force; a clinic in the sheer healing power of music. It’s also a testament to just how much Freddie Mercury meant to Queen, music and the entire world really. So it should be no big surprise that the music world that Mercury’s worked every day to enrich showed up in spades to join the surviving members of the band - Brian May, John Deacon, and Roger Taylor - and thousands of screaming fans to hold a tribute concert to their deceased front man.

Among those to show up and take the stage were Seal (“Who Wants to Live Forever”), Robert Plant (“Crazy Little Thing Called Love”), Roger Dalttey and Tony Iommi (“I Want It All”), James Hetfield (“Stone Cold Crazy”) and George Michael (“39”). David Bowie and Annie Lennox steal the show with a rousing, and thoroughly memorable, rendition of “Under Pressure,” a performance that not only leaps off the screen, but also might be worth the price of admission here all by its lonesome. Afore mentioned Black Sabbath axeman Tony Iommi is perfection each time he graces the stage (he also joins Gary Cherone for “HammerFall” and Elton John for “The Show Must Go On”), something that can also be said for Axl Rose (well, the 1992 version of him at least), who torches the stage thanks to Queen classics “Bohemian Rhadsody” (Elton John is equally as transcendent) and “We Will Rock You,” another standout moment of The Freddie Mercury Tribute Concert.

The Freddie Mercury Tribute Concert is a must-must-must own, one every music fan, far and wide, needs to experience. In a word, this is special.