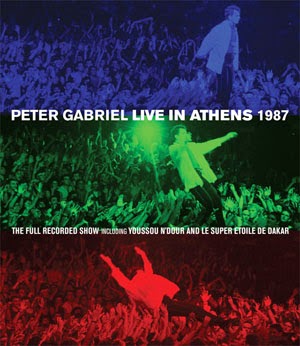 It should without saying how incredibly talented Peter Gabriel is as a performer. Honestly, c’mon. You shouldn’t need much reassurance of that fact, but if you do, Live In Athens 1987 is more than enough of said reassurance.

This concert release finds Gabriel at the literal top of his game and it seems the man only gets better the larger the crowd in front of him gets. Here thousands upon thousands of adoring fans laud Gabriel during a brilliant performance filmed in Athens, Greece during the apex of his “So” tour in 1987. As you’d imagine, all of the staples are here, from “Shock the Monkey” and “Solsbury Hill” to “Sledgehammer” and “In Your Eyes.” This might the best, most emotionally gut-wrenching version of “In Your Eyes” you’ll ever hear, though don’t sleep on “Mercy Street,” which is a pure highlight of this set.

As far as bonus content goes, Peter Gabriel Live In Athens 1987 offers up perhaps the best collection of bonus material Eagle Vision has ever put together for one of their DVD releases. Not only will viewers get the chance to experience this concert as it was meant to from start to finish with full sets from opening acts Youssou N'Dour and Le Super Etolie De Daker,  Peter Gabriel Live In Athens 1987 also treats viewers to a full collection of Gabriel’s music videos from the past quarter century. So, yes, you now have full access to iconic videos for “Sledgehammer,” “Solsbury Hill,” “Shock the Monkey,” “Big Time” and “In Your Eyes.”