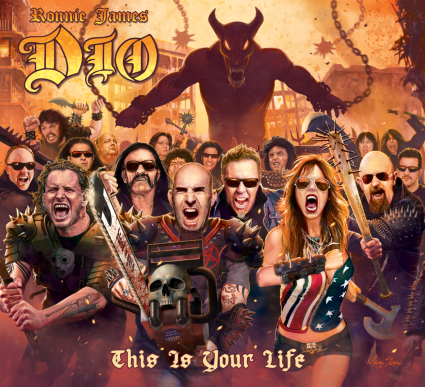 Ronnie James Dio - This Is Your Life is a testament to Dio’s lasting legacy, and while Dio’s place as a pillar and monument in rock history doesn’t need any further cementing, this album does just that. It’s not every day that one man, one being, can touch so many lives, but that’s exactly what Dio, who lost his battle with stomach cancer in 2010 has done, and  Ronnie James Dio - This Is Your Life showcases just that. Tenacious D, who has been paying tribute to Dio since 2001’s “Dio,” return with “The Last In Line,” the title track off of Dio’s 1984 sophomore record. Jack Black’s voice is perfect during this take and if you ever thought Black and Kyle Gass were a mere comedic act, think again. But that’s not the only noteworthy moment here – Adrenaline Mob more than live up to the Black Sabbath track “The Mob Rules,” Corey Taylor absolutely slays Dio’s timeless cut “Rainbow In the Dark,” the Scorpions drop a power ballad bomb on “Temple of the King,” and Rob Halford teams with Dio collaborators Vinny Appice, Doug Aldrich, Jeff Pilson, and Scott Warren for “The Man On The Silver Mountain,” by and large the album’s most badass track – these riffs are as infectious as they are chunky. Metallica steps into the way back machine with their nine-minute “Ronnie Rising Medley” sonic adventure, which combines the Rainbow songs “A Light In The Black,” “Tarot Woman,” “Stargazer,” and “Kill The King.” Fittingly, Dio himself wraps Ronnie James Dio - This Is Your Life up in a wonderful bow with a transcendent rendition of “This Is Your Life,” originally released on 1996’s Angry Machines. Joined only by his longtime keyboardist Scott Warren on piano, Dio places an emphatic stamp and seal of approval on this record with near indescribable aplomb. And in addition to this collection of killer once-in-a-lifetime tunes, proceeds from the sale of the record will towards the Ronnie James Dio Stand Up and Shout Cancer Fund (diocancerfund.org). If Ronnie James Dio - This Is Your Life is any indication, while Dio may be gone, he will surely NEVER be forgotten.

Grade: A-
Download: Corey Taylor – “Rainbow in the Dark”