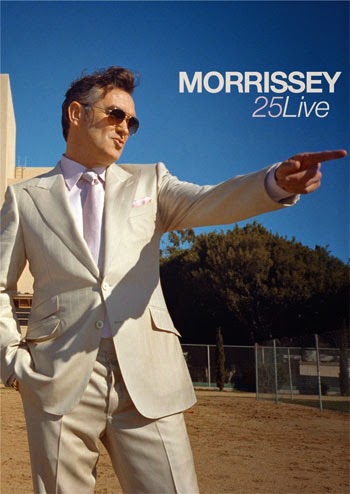 Post-Smiths Morrissey is really like KISS – either you love him or you hate him. If you’re a casual fan, then that means you’re more than likely a Smiths fan. This is something on display throughout Morrissey’s 25 Live DVD, a visual offering that presents a unique look at Moz onstage, because it’s filmed in front of a much smaller audience than the King Crooner normally performs in front of.

Filmed at Los Angeles’ Hollywood High School, Moz performs in front of an intimate audience to say the least. Opening with “Alma Matters,” off of 1997’s Maladjusted, Morrissey plunges into a set comprised of 19 tracks, both old and new, taken from both his own discog, and the Smiths. Other highlights from his solo catalog include “Irish Blood, English Heart,” “November Spawned a Monster,” “You Have Killed Me” and “Everyday Is Like Sunday,” though the truly best moments come when Moz turns back the clock and descends into Smiths territory, especially on particularly emotional renditions of “Please Please, Please Let Me Get What I Want” and the closing “The Boy With The Thorn In His Side,” which features Moz pulling a child onto stage and holding him during the majority of the song.

The glaring issue with 25 Live is how much asskissing goes on between these rabid fans and Morrissey himself. Now, this is nothing new, and if you know anything about Moz and his fans, you know they are literally in love with him. But it does detract from the overall performance when Moz continuously hands the microphone to the crowd so they can tell him how much they adore him.

There are some omissions from this set list, but that’s going to be the case when it comes to pretty much any live release. Still, it’s not the ultimate Morrissey collection, but that doesn’t mean it isn’t worth owning.