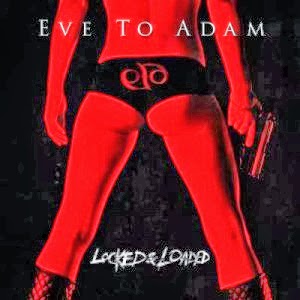 Eve to Adam follow in the footsteps of fellow nu-rock contemporaries such as My Darkest Days, Hinder and Saving Abel on their latest full length Locked and Loaded, an album brimming with songs just as likely to be playing at your local rock radio station as they are at your local men’s gentleman’s club. Now, comparing Eve To Adam and Locked and Loaded to those afore mentioned bands isn’t a complete and utter detriment, though with connections such as those looming, listeners should pretty much know what they’re getting into.

Locked and Loaded doesn’t mask itself; it’s unabashed in what it is – it’s a hard rock album, plain and simple. Right from the start, Locked and Loaded lays all its cards on the table with the album’s title track – relentless, chugging guitars, grit-tastic vocals and pounding percussions fill the air, a trio of sounds listeners can expect early and often on Locked and Loaded (“Bender,” “With the Truth”), though the album isn’t exactly all such pomp and circumstance. There’s more than enough melody and appealing hooks to go around (“Straightjacket Supermodel,” “Immortal”), but Locked and Loaded doesn’t get any better than when the amps go to 11 and Eve To Adam (to quote such a cliché) let it all hang out (“Forgive,” “Fortune Teller”), but those downtuned guitars, breakdowns and screaming vocals are just too fleeting and far and in-between to be honest.

Don’t let the comparisons scare you off – Locked and Loaded offers enough to classify it as intriguing. The problem with it, and with most albums released by those afore mentioned bands, is that there is just far too much filler (IE the majority of the middle of the album).