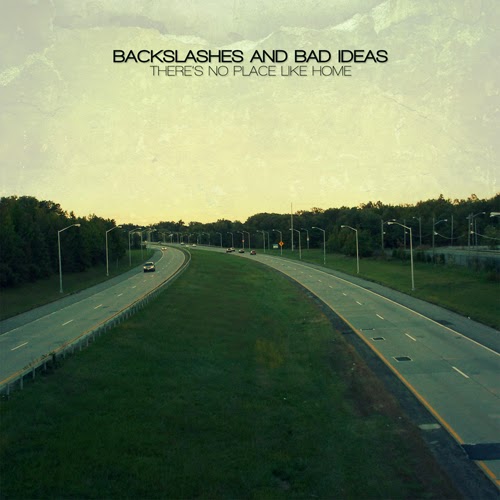 Backslashes and Bad Ideas proclaim themselves a pop-punk band, though their latest offering There’s No Place Like Home says otherwise. While this is indeed pop-punk, that moniker, that label, it isn’t all this album is. There’s No Place Like Home is an ardent piece of nostalgia, one that harkens back to the early days of the punk-pop/emo genre that shows  quite a bit of early Bayside and post-Tell All Your Friends Taking Back Sunday worship. The comparison to the latter works on a number of levels as well, as not only are Backslashes and Bad Ideas fellow Long Islanders, former TBS guitarist Fred Mascherino (The Color Fred, Terrible Things) makes an appearance on the song “Defend Josh's Life Choices,” a track rife with perfect vocal harmonies and soaring guitars. Vocalist Nick DePalo adds a unique layer to There’s No Place Like Home thanks to his oft-gritty voice, which shines brightest on the acoustic offering “Southern Tea,” a track that sounds taken directly off the cutting room floor of (fellow Long Island natives) Brand New’s Your Favorite Weapon recording session. Drummer Ed Mone’s use of slick double bass also stands out, effectively adding a layered feel to tracks such as “No Matter What Happens, Don't Ask Who” and “Conditions.” The closing “Wearing Thin” is one of the EP’s strongest tracks, presenting a The Starting Line vibe via sing-along hooks and gang vocals sure to illicit copious amounts of crowd participation. There’s No Place Like Home is as promising an EP as you’ll hear anytime soon, and if this six song clip is proof of what Backslashes and Bad Ideas are capable of, oh boy, look out scene.