Weedeater Signs to Season of Mist 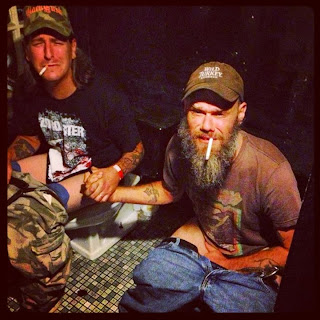 Season of Mist is proud to announce the signing of the legendary sludge outfit Weedeater ("Dixie" Dave Collins - Bass, Vocals; Dave Sheperd - Guitar, Vocals). The North Carolina-based band is writing new material for their first Season of Mist recording, slated for a release in 2014.

Weedeater was formed by front-man/bassist "Dixie" Dave Collins. Following the release of their 2001 debut …And Justice For Y’All, Weedeater immediately established themselves as a force in the U.S. tour circuit and quickly gained notoriety in the American metal scene. In the time since, the band have released three critically-acclaimed albums: Sixteen Tons (2002), God Luck And Good Speed (2007), and Jason… The Dragon (2011). The band has played prestigious festivals such as Maryland Deathfest, Hopscotch Festival, Stoned From The Underground, Asymmetry Festival, Roadburn Festival, Hellfest, and many more.

Weedeater four full-lengths will see a digital re-release on Dec. 10 worldwide, and will be followed by the release of physical formats in 2014.

Regarding the signing, Weedeater said, "When we heard we would be working with Season of Mist we almost wrecked our pants. Can't wait for y'all to check out this sh*t."