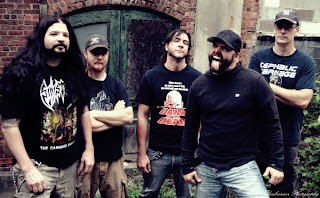 Relapse Records is extremely proud to announce the official re-signing of recently reunited New York Death Metal legends Skinless! Formed in 1992, in Albany, New York, Skinless have released four full-length albums and numerous EPs throughout their 20+ year career. After disbanding in 2011, the group is now back together with the classic Progression Towards Evil line-up (Sherwood Webber-Vocals, Noah Carpenter-Guitar, Joe Keyser-Bass, Bob Beaulac-Drums) plus the recent addition of Dave Matthews on second guitar.

The group will begin writing their long awaited follow-up to 2006's Trample The Weak, Hurdle The Dead which is expected to be released in late 2014.

Vocalist Sherwood Webber commented on the re-signing: "RELAPSE RECORDS! I'm sure it's rare for a band to speak so highly of their label after a 13 year relationship. It's an honor to have such a team to work with, RELAPSE's support and friendship is beyond appreciated. The RELAPSE experience is hard to explain, but you can notice immense camaraderie between all the bands on the roster. It's been one of the great privileges I've had in the music business to be a part of the Relapse family. Thanks guys, tell the world it's doomed!"

Founding member / guitarist Noah Carpenter added: "We're proud to be a part of the sadistic Relapse family once again. Skinless is far overdue for a new album so that will be our priority for the next year. Basically we're going to put the Progression, Foreshadowing and Trample albums into a blender, add some guitar solos and serve up the heaviest Skinless release yet."