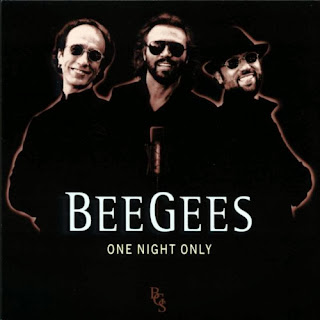 The Bee Gees sold over 110 million albums worldwide and scored 19 #1 hits during a highly successful career that has spanned five decades and One Night Only, a re-release of the 1997 DVD release of the same name, chronicles their contact success with a 30+ song setlist featuring just about every song you’d ever want to hear the Bee Gees play live.

Such an expansive setlist should cater to both the hardcores and the casual Bee Gee listeners, one that spans 33 songs and nearly three hours in length. All of the heavy-hitting staples are here – “Islands In the Stream,” “Night Fever,” “More Than a Woman,” “Heartbreaker” and “Stayin’ Alive,” as well as “You Should Be Dancin’,” a classic Bee gees cut which both opens and closes this performance.

A 19-minute interview with all three Gibb brothers represents the only extra featured on One Night Only, but it’s a worthwhile interview as the trio recall various stories from their past. Various footage from music videos and movies they have contributed to is also included, as is documentary material taken from their younger days in Australia.

One Night Only is exhaustive and might just be the definitive Bee Gees setlist if any fan were to create one. If nothing else, this DVD offering shows why the Bee Gees have gotten to where they are in the annals of pop music history.