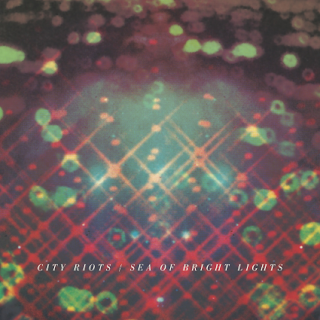 Nearly a year after releasing it in their native land of Australia, City Riots have brought their latest album Sea of Bright Lights stateside. And truth be told, the indie scene in the states is better off for it.

Sea of Bright Lights is in large part comprised of dream pop mired in a fog replete with jilted, jangly guitars laid atop a bed of fuzzed out harmonies and hazy hooks (“Wait for You,” “Take You There”), though deep undercurrents of sensual bass rise to the surface on occasion (“Turn,” “In This Space”). Sea of Bright Lights is captivating and engulfing, a record truly full of lingering sounds. At times it conjures transitory memories of wistful, carefree Wish-era The Cure (“Catch the Sun,” “Lonely Hearts”), which is certainly high praise. If you come along for the ride that is Sea of Bright Lights, make sure you stay for the whole ride, because the penultimate track “Pirates” is immaculately enchanting.

As they say, you only get one chance at a first impression, and it’s hard to imagine City Riots making any better of a first impression on this country’s impressionable music scene than with Sea of Bright Lights. Though to be honest, the band says it best themselves - “this record has been a long time coming, but as they say, good things come to those who wait.”