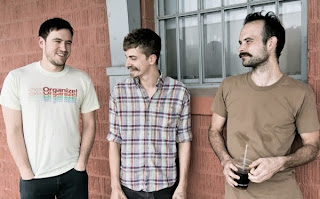 Brutal Panda Records is proud to announce the signing of Austin, TX psych/math rockers Boyfrndz. The band formed in 2011 and have released one full-length and a series of EPs that quickly garnered them attention from both fans and critics. Boyfrndz are currently writing their new full length, with recording expected to begin in early winter at Cacophony Recorders with producer/engineer Erik Wofford (The Black Angels, White Denim). A tentative spring release is being planned through Brutal Panda Records.

Singer/guitarist Scott Martin had this to say about the new material:

"We're all excited about the new material, which is usually the case with groups or artists, but we're especially excited to give this to everyone else. Its seeming a little more aggressive and dark, but like our other records, we'll probably have a bit of it all. That's how we listen to music, so naturally thats how it comes out."

The new record comes on the heels of their excellent Natures EP, which was produced by Ikey Owens (The Jack White Band, The Mars Volta) and released this past Spring. The EP can be downloaded and streamed HERE. The video for the track 'Moving Parts' can be seen HERE.