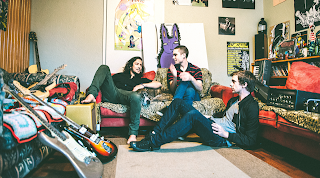 Hindsight Records are excited to announce the inclusion of Perth alternative trio Black Birds to their growing roster of Australian artists.

Black Birds have spent the last three years flourishing as a band, releasing their self-titled EP and single "What A Way," whilst playing extensively throughout Western Australia - now currently in high-demand as one of WA's best support acts. 2013 shows and local tours with The Novocaines, Emperors, Foam and many others have cemented Black Birds as one of Perth's must-see bands.

With the move to Hindsight Records comes the release of the band's second EP Falling In Waves. The EP was recorded and mixed by Laurie McCallum at Sumo Studio (French Rockets, Lanark, Echo Kid) and mastered by Bill Henderson at Azumith Studio (Balance & Composure, Title Fight) and Don Bartley (Silverchair, The Vines) at Benchmark Mastering.