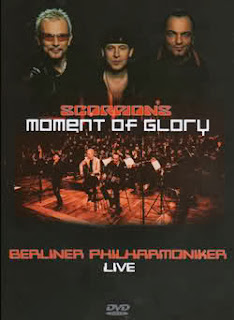 What happens when you take a venerable rock band like the Scorpions and add in a full on orchestra? Well, good things of course, which is what Scorpions: Moment of Glory Live sets out to show. The new DVD offering finds the band teaming with the Berliner Philharmoniker (Berlin Philharmonic Orchestra) to showcase wares off their 2000 studio album of the same name.

Scorpions: Moment of Glory features selections from the band both old and new, offering an interesting, orchestral take. The setlist here, while short at only 11 songs, gives old school fans something to sink their teeth into (“Big City Nights,” “Wind of Change,” “Still Loving You”), while giving something new at the same time (“Hurricane 2000,”a reimanged “Rock You Like a Hurricane”). That being said, Scorpions: Moment of Glory isn’t a recommended venture for new or even casual fans to the band – this is one for the mainstays, and the hardcores, which isn’t really to say that only the latter will enjoy.

The bonus content is minimal, though the interview with the band is intriguing as they detail their collaboration with the orchestra, but if you’re getting into Scorpions: Moment of Glory you’re coming for the meat and potatoes, which is the main setlist. This is a release recommended for the more adventurous fans of the Scorpions.