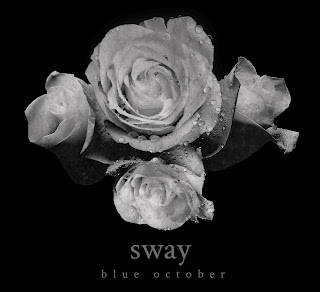 The best thing about Blue October’s seventh studio album Sway may just be how far removed from the languishing disaster that was 2011’s Any Man in America. On Sway, it seems that Justin Furstenfeld and company have gotten their minds right in order to get back to the dreamy alt-rock that has come to be expected of them, and therein lies the albums biggest inherent problem – it’s too safe. No, this isn’t the Blue October of old, and at the same time there isn’t much tangible progression here to note.

Beginning with the all-too-short “Breathe, It’s Over,” a haunting harbinger of things to come and perfect segue to the album’s title track, Sway boasts a number of moments that seem all too familiar (“Angels In Everything,” “Bleed Out”), though there are instances in which the band step outside their comfort zone, such as the electro-fueled “Light You Up,” the grungy, cocksure bravado of "Hard Candy," and the all-too-enjoyable  instrumental closing track "To Be," instances that ultimately save Sway from the lurch. “Not Broken Anymore” stands as a highlight moment on Sway, a penultimate track that effectively uses subtle string arrangements to enhance the overarching emotion of the track, causing it to stand out above the rest of the album.

With Sway, the band has gone back to the very same well that has allowed them to exist for seven full lengths, though it’s fairly hard to judge if this is the band merely returning to the status quo or if this is actually the start of something good. There’s growth here sure, but just how much is surely an arguable point.