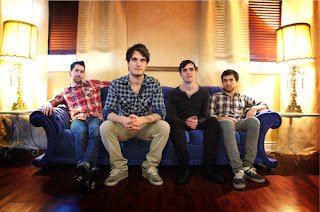 Toronto, Canada's July has signed to TDR Records, who will release the band's full-length What We Signed Up For on November 12th. Already released exclusively in Japan on Kick Rock Invasion, the full-length will now be available worldwide.

"I couldn't be more excited to have July as part of the TDR family. I instantly fell in love when first hearing the band, I believe they are going to do big things," says TDR Records owner Mike Hollins. July will be joining a roster that includes Punchline, Barely Blind, The Promise Hero, and more.

July has already played in 3 different countries this year. This includes the "Beyond The Blue Tour," a Japanese tour which featured Hit The Lights, We Are The In Crowd, Set It Off, and Divided By Friday, several US tours, and playing in their home country of Canada with appearances on Warped Tour, Sounds of Burlington Festival, Koi Con, and Canadian Music Week.