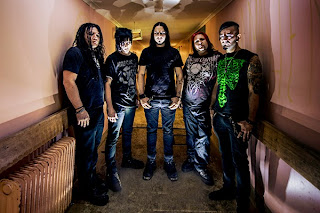 Eclipse Records is thrilled to announce the signing of Our Last Enemy from Sydney, Australia which features former Genitorturers & The Undead member Bryce “Bizz” Bernius on guitar.

Our Last Enemy caught the eye of Eclipse when they released their EP last year, and it climbed to the number two position on the Australian iTunes metal chart, second only to Meshuggah, released on the same day. “When I first heard Our Last Enemy, they immediately commanded my attention” states label president Chris Poland. “Their sound is just so damn heavy - like a ton of lead being balanced on your head!”

“Of all the labels we had been speaking with, Chris and the team at Eclipse seemed to really understand what the band is trying to do and how to take us there” says vocalist Oliver Fogwell. Bassist Matt Heywood continues, “signing with Eclipse makes us extremely happy because they've been responsible for launching some of our favorite bands. It’s a very exciting time for us”.

The band recently wrapped up production of their brand new full length album entitled Pariah, which is planned for release in early 2014 by Eclipse Records (Mushroomhead, Bobaflex, Scum of the Earth). The album was recorded at the famed Temple Studios (Los Angeles, CA) and was produced by Christian Olde Wolbers (ex-Fear Factory) whose production credits also include Bleed the Sky, Godforbid, and Mnemic.