RevieweDVD! Queen - Queen On Fire: Live at the Bowl 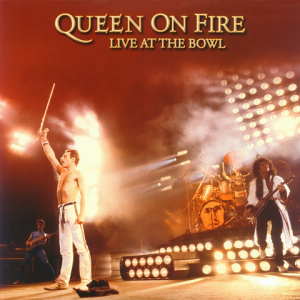 Queen
Queen On Fire: Live at the Bowl
Eagle Vision

Anytime you can take Queen, and not just any Queen, the 1982 near-unstoppable version of the legendary rock outfit, and put them in a place like the Milton Keynes Bowl in front of 65,000 fans, you know it is going to be something special. Enter Queen On Fire: Live at the Bowl.

Queen On Fire: Live at the Bowl, a glorious concert partially broadcast at one point in time on the BBC, captures the band in all of their reverent splendor, with the long missed pomp and circumstance of Freddie Mercury front and center. This DVD offering is a haul, as it presents the entire concert from June 5, 1982 in its entirety, and rest assured you’re in for a treat when this DVD enters your player. Keep in mind, we’re talking 25 tracks here.

This is a greatest hits if there ever was one, featuring any number of songs you’re going to want to clear your schedule to see live, including “Somebody To Love,” “Under Pressure,” “Fat Bottomed Girls,” Crazy Little Thing Called Love” and “Another One Bites the Dust.” Queen Of Fire: Live At the Bowl ends fittingly with the heavy-hitting combo of “We Will Rock You,” “We Are the Champions” and “God Save the Queen,” a trio surely befit of the Queen herself.

For bonus material, Queen On Fire: Live at the Bowl offers some interviews with Mercury as well as Roger Taylor and Brian May, as well as some tour highlight packages and a photo gallery.

Still, it’s Mercury that steals the show here. The way he commanded crowds, even of this size – 65,000 strong mind you – is something to behold, and something that should never be forgotten. Ever. Queen On Fire: Live at the Bowl is that reminder, one of just how purely dominant a force this band was.