Reviewed! Throw the Fight - What Doesn't Kill Us 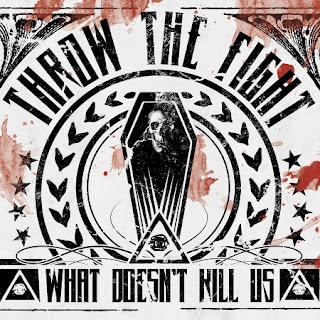 Throw The Fight
What Doesn’t Kill Us
Bullet Tooth

There are moments throughout Throw the Fight’s latest What Doesn’t Kill Us that will have you thinking that you’re listening to the second coming of Atreyu, namely the Lead Sails Paper Anchor era (and if you don’t know, this is NOT a bad thing). It should also come as no surprise to find out that What Doesn’t Kill Us was produced by John Feldmann, the same man who manned the boards for that afore mentioned Atreyu release. It’s a welcomed feeling that smacks you square in the mouth right out of the gates with the cathartic opening tandem of the chugging “Bloodshot Eyes” and vigorous “Not So Hollywood” (be sure not to miss the breakdown at about the 2:00 mark). It’s not a stretch to imagine the latter commanding radio waves in the very near future.

What follows on What Doesn’t Kill Us is a slate of driving, powerful jaunts fueled by tight, focused melodies spurred on by frontman James Clark’s smooth, effortless vocal flow (“When the World Stops Spinning,” “Lights Out Summer,” “You Can’t Swim With Concrete Shoes”). The penultimate cover of Cutting Crew’s one-off classic “(I Just) Died In Your Arms Tonight” is worth noting here as well, because while you know you’re listening to a rock cover of an 80’s pop tune, you never forget you’re listening to Throw the Fight, which is the mark of a good cover.

Throw The Fight is a band that’s on their way, one that could/should quickly become a force to be reckoned with in the rock/metal game.