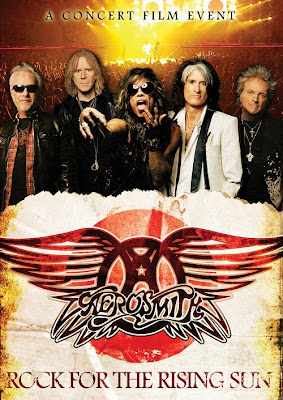 To be honest, Aerosmith have never been ones for following rules. So the legendary band disregarding warnings to not perform in Japan on their Back On the Road in the wake of a devastating earthquake, tsunami and nuclear meltdown shouldn’t come as much of a surprise. Their sheer defiance brings us Rock for the Rising Sun, Aerosmith’s first concert release in nearly a decade, one aimed at lifting the spirits of the embattled Japanese people, and in true Aerosmith fashion, they succeeded.

Rock for the Rising Sun isn’t a straight-forward concert release as you might expect. While the concert itself makes up the majority of this DVD offering, the live performances are spliced with tour snippets and various backstage footage, which comes across as nothing more than filler. Sure, it’s nice to see the band in their natural habitat and nice to see them off the stage and behind the curtain, but the real meat here is the live performance. The set list of high quality as you probably expect, a rather lengthy one consisting of a who’s who of Aerosmith songs (“Love An Elevator,” “Livin’ On the Edge,” “Sweet Emotion”).

In light of the track list, there are a number of highlight moments throughout Rock for the Rising Sun, most notably a straight up guitar duel between Joe Perry and Brad Whitford on “Mama Kin,” a six string battle that will probably make you want to practice more (if you’re a guitarist that is). The low end work of Tom Hamilton stands head and shoulder above all else.

The band save two of their best for last in “Walk This Way” and Rock Band video game favorite “Train Kept a Rollin’”. Rock for the Rising Sun is a release that finds Aerosmith doing what they do best – entertaining people that need to be entertained.