Shot Down Stay Down Signs With Standby Records 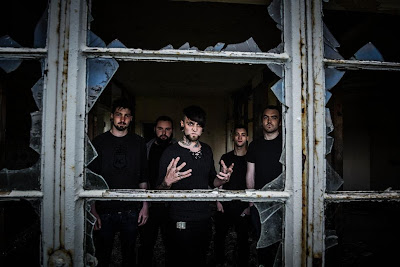 UK deathcore/hardcore outfit Shot Down Stay Down has signed with Standby Records. The label will release the band’s debut LP Dodge This digitally on July 23.

Based out of York, in North Yorkshire, England, the 5-piece, with their raw sound and highly aggressive live performance, have shared stages with the likes of Miss May I, Betrayal, Thick As Blood and many others.

Formed in early April 2011 Shot Down Stay Down quickly established their place in the local music scene. After the untimely end of rising York band Kill The Captain (during which former members Danny Worsnop and Sam Bettley left to pursue careers in the greatly anticipated Asking Alexandria), vocalist Ashley Oldroyd and guitarist Abram Welburn joined up with Oliver Altham (Guitar), Cameron Bland (Bass) and Andrew McMullon (Drums) to form Shot Down Stay Down.

Drawing on past experiences and driven by their thirst to perform, Shot Down Stay Down set about writing their 6-track EP Tyrants (a free digital release). Recorded at Innersound Studios with good friends Joe and Sam Graves from York band With One Last Breath, they were able to create a sound that truly reflects their passion.

Shot Down Stay Down returned to work with Sam and Joe Graves in late 2012 to produce the first full length release: Dodge This, a sarcastic, groove-ridden experience with enough bounce to send King Kong into space.